The single most outstanding element of Chinese landscape painting is that each stroke of the brush is a defining move. It has to be precise because it cannot be corrected nor improved. The drawing is directly painted without any preliminary sketching and often no model is needed. The subject comes from the artist’s memory, embedded deep within his mind from long years of study and observation of nature and people. This tradition is very different from the West, where watercolor artists sometimes do sketches on paper, make corrections to their watercolor paintings and at times, overpaints part of their work.

In Chinese landscape painting, the object is not just a representation but also a symbolic manifestation. A full plant is never rendered, just a few branches with leaves and blossoms that already represent the entirety of the plant. In constructing a Chinese landscape painting there are two elements that are traditionally present: a Host, shown as the stronger or larger tree, flower or any object and a Guest, which is shown as a smaller object.

The revered master Hsieh Ho created the Six Canons of Chinese landscape painting in the 5th century AD and these are still in use today. 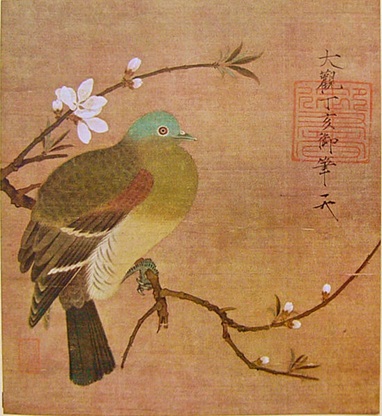 Initially there were only two subjects, the orchid and the bamboo. Later two other favorite subjects emerged, the plum blossom and the chrysanthemum. Each one has its own meaning.

The orchid is the symbol of spring, which denotes hope, because of its modesty and unity.  Summer is represented by the bamboo, which symbolizes perseverance, flexibility and endurance.  The beautiful large blossoms of the chrysanthemum represent autumn and life’s triumphs through fortitude, patience and persistence. Plum represents winter, as it symbolizes the secret promise of rejuvenation, renewal, as well as the continuous hardiness and continuity of life.

Rendering these four objects, also called Four Gentlemen, could be formidable. It requires the subtle expression of the spirit, precision in the employment of traditional techniques in the application of brush strokes and very strict discipline from the artist. The objective is always to express the subject’s inner essence and personality by following its form.

Chinese brush artist visualizes a written idea, using the movement of the brush as its aesthetic element. The bone work of the painting gives it its muscle and strength. Bone work used to paint the twigs, stems and branches should have the strength to compliment the delicacy of the flowers. Chinese landscape painting might look simple, but when you understand the story and work invested on it, you would see that it is very complex and reflective.