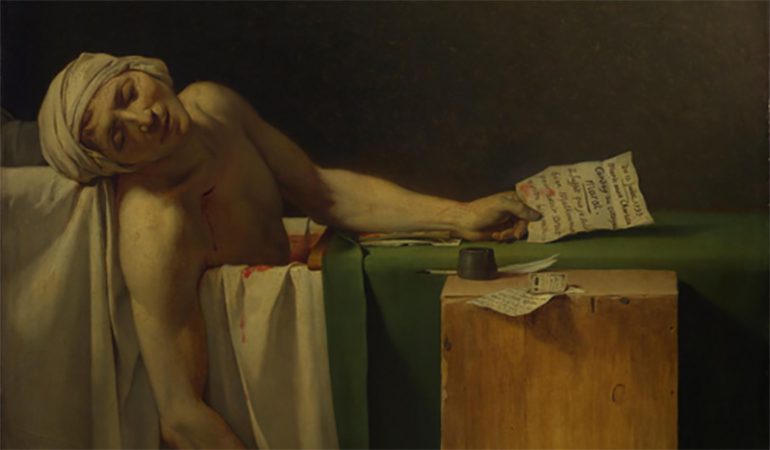 Jacques-Louis David was said to have been a popular artist during his day. Not strange for the man who Eugene Delacroix claimed to be ‘the father of modern painting’. The neoclassical art movement started around 1770 and at its time he was the one who led this reaction in art against the Rococo school and Roman art, and the decadent French court. He’s known to have sided with the revolutionaries during the bloody French revolution and his works were said to have been used for propaganda. One such painting was The Death of Marat in 1793.

The Death of Marat is based on a story during the French Revolution, about a blood-thirsty man named Jean-Paul Marat. He was a Swiss journalist and a physician. He was also one of the people who planned the September Massacres and the Reign of Terror. He was the type of person you’d easily find in today’s millennial generation: embittered, self-righteous, suspicious, mad for control and persecution of others, and has a skin condition (said to have been dermatitis herpetiformis) that can only be soothed by taking long baths. He’s even part of a radical left-wing group – the Montagnards, where he was one of its leaders. As part of the Committee of Public Safety, one of his hobbies was said to write off names from a list of people that was going to be tried, tortured and executed while he was soaking in his bath. By all aspects he’d definitely fit in with the radical left-wing males usually seen in western countries if he were alive today. 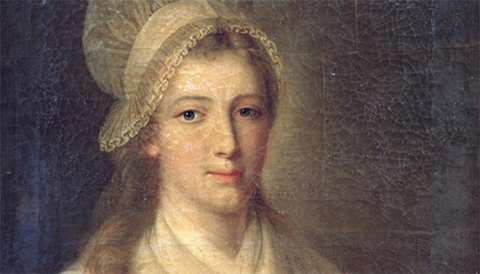 According to the story, it was a woman that brought his downfall. Marat was killed by one stab in the chest. The killer was Charlotte Corday, a young Girondist. The Girondists were the moderates of their time and the Montagnards were the radicals. They were rivaling factions within one group, the Jacobins and during the time of the revolution, after overthowing the government, they fought. Eventually the Girondists, after trying to prevent the madness of the Montagnards, were accused of monarchism and were executed. This mass execution of the Girondists became the first of many during the Reign of Terror.

The story goes that one day Charlotte gained access to Marat’s home by telling him that she had a list of names of those who are counter-revolutionaries that lives in Caen. Of course, that was a lie and after an interview and a promise from Marat that the people were going to be executed by next week Charlotte pulls out a knife and stabbed the bastard. Marat died due to massive bleeding, his carotid artery was said to have been severed by the attack. Charlotte didn’t made any attempts to escape. She was captured and after a few day, she too was beheaded.

So how do you use this story in a revolution? David had to focus on several things: one; to present Marat in a more pitiful light and two; give the image a feeling of sentimentality. To make the audience even more focused on the image he made the background a simple unadorned wall. In his hand was the letter that was supposed to have been from Charlotte. This letter is an element of fiction that David added to increase sentimentality. Another letter on the crate that Marat was using for a table serves the same purpose. The lists of people he was going to kill, that he would have been fiddling with at the time, was replace by two letters that didn’t exist to increase the sentimentality of the whole piece. As for Marat’s body he tried to make it look similar to dead bodied you’d usually see in religious paintings. Light shining upon the dead Marat gives it a peaceful air.

The Death of Marat is usually compared with the Pieta and the Entombment of Christ, usually because of the dangling arm, an element that David used so people would compare the three. He really had to give his all for this one: a complete re-imagining of a person who would happily cross out people he sent to have their heads chopped off on the National Razor. It is definitely a masterpiece, and probably one of the most deceitful art of all time. Marat, under Davids art, became a martyr of the revolution instead of the instigator and the blood-thirsty murder he should have been remembered as.

Featured and 1st image by Marat dead, as David envisioned him, via Wikipedia

2nd image by Charlotte Corday, the heroine and murderer of Marat, via Wikipedia