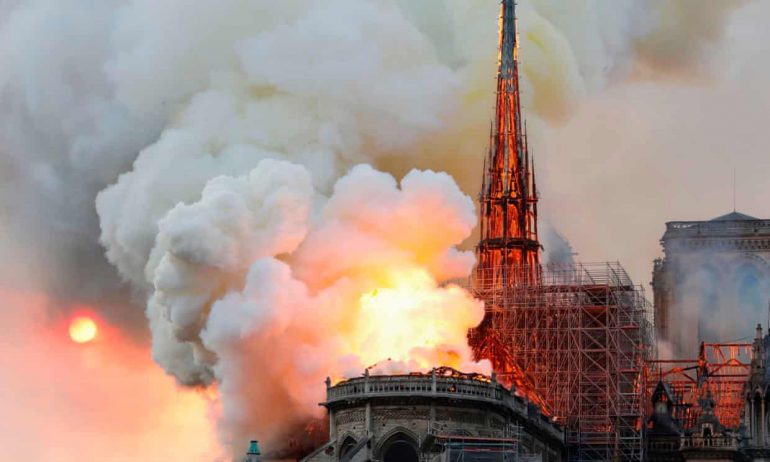 One of France’s greatest historical sites, the Cathedral of Notre-Dame, caught fire on April 15, 2019. To people who loved the Notre-Dame, its place in art and history, and to devout Christians, seeing it burn is just as gut-wrenching as all the other major tragedies that had happened this year. Aljazeera reports that thousands of Frenchmen on the streets watched the fire “in dismay.”

What Do We Know

According to reports, around 16:50 GMT, a fire started at the attic of the cathedral where there’s restoration work being done. The fire consumed the central part of the roof immediately and the spire on top of it. Eventually, the whole roof was on fire. Five hundred firefighters worked on it but they were unable to save the roof and the spire, which collapsed. They did, however, managed to save the outer walls and the two bell towers. The fire was declared out the following morning at 8:00 GMT.

Officials and investigators are still clueless about what really caused the fire. Sadly, Muslims that has anti-Christian sentiments and radical Jews, who resent the history of animosity between Christians and Jews in France, responded positively to the burning of Notre-Dame, causing conspiracy theorists to blame either one of the two groups or both. Officials, however, ruled out the possibility of arson and the circulating story is that the restoration efforts that were being done on the roof might be the cause of the fire. The NYTimes argued that the roof “was a tinderbox” due to the lack of modern fire-prevention features. The fire, happening in the middle of the Holy Week, was painful for both Christians and Frenchmen and both could only lament about it.

Notre-Dame lost the roof and the spire, and it is reported that they can’t be reconstructed because there are no trees today that are similar to the ones used to build the roof. Apart from that, everything else seems safe. The 16 statues of the 12 apostles and the 4 evangelists that were removed from the spire as part of the restoration efforts were all safe elsewhere. The paintings were away from the fire, but Frank Riester, Culture Minister of France, said that the smoke could have damaged them instead. The organ of the Cathedral, with all it’s 8,000 pipes, were unaffected by the fire, but the water used to put the fire out might have somehow affected it.

Among the missing relics are Madonna and Child statue, the statue of Saint Denis, and the painting of Saint Thomas Aquinas. Relics that belonged to Saint Denis and Saint Genevieve, as well as a fragment of the Holy Crown of Thorns, were all reportedly lost along with 5% to 10% of the treasures and artworks stored in the Cathedral during the fire, according to the secretary general of Observatory for Religious Heritage, Maxime Cumunel.

Saved from the fire were a fragment of the Holy Cross and the Nail that was used on Christ, which was reported to have been missing earlier. There’s also the Crown of Thorns (that Christ wore during his crucifixion), as well as the tunic of Saint Louis (the only King of France who got canonized as a saint for participating in the Crusades).

After the fire, talks of restoration began. Emmanuel Macron, President of France, pledged to restore the building. This caused a huge split between people, mostly liberal architects, who wanted to redesign the roof and spire with a more modern look and those who, mostly Parisian citizens, wanted to restore the roof and the spire as faithfully as they can to the original. Given how soulless and terrible modern architecture looks like, it isn’t a surprise. A glass roof and spire was suggested by the Royal Fine Art Commission, and the Internet trashed the idea as hard as they could. Hopefully, the French get what they want regarding the restoration of the roof. But getting wooden roofs again would be out of the question. The likely end, if they really wanted a restoration, would mean that they’ll still end up using more modern materials.

Image Source: Via The Guardian.