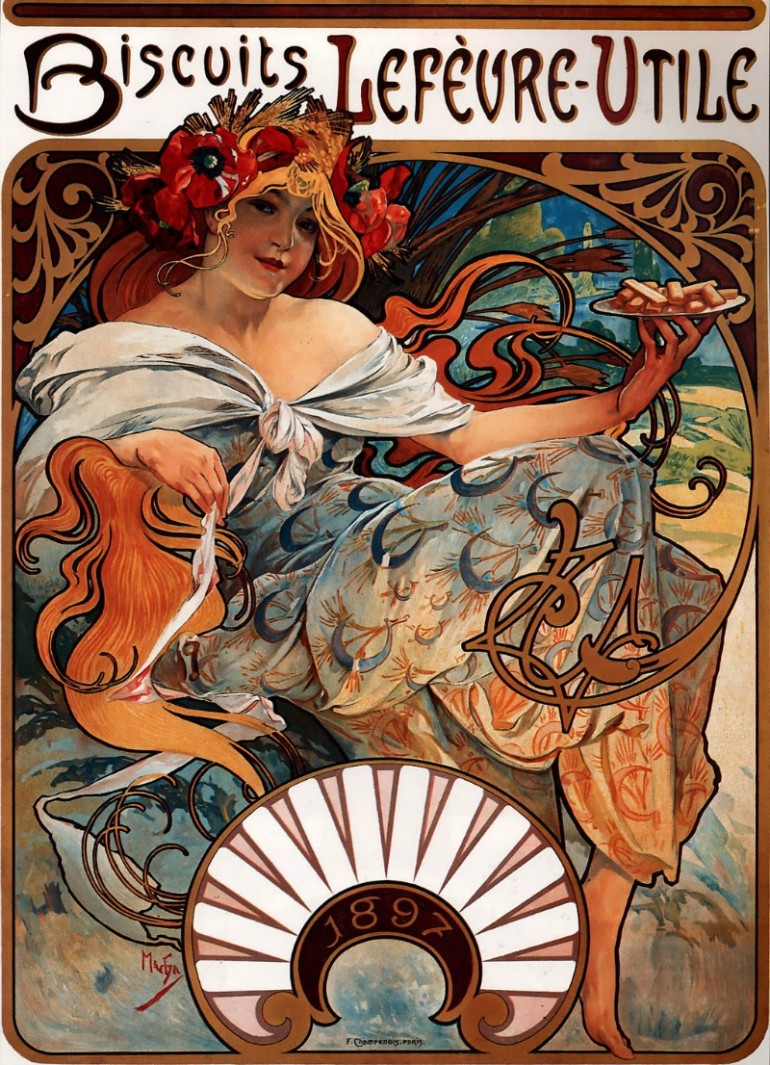 When it comes to poster art, one of the most well-known designer is Alphonse Mucha. His Art Nouveau style poster is often copied, from his time until today. He became famous after he created a life-size poster for Sarah Bernhardt, who was starring as Gismonda in 1894. Bernhardt was so impressed with her poster that she contracted Mucha for six years.

Alphonse Mucha was born in Ivanice, Moravia on July 24, 1860. The lifestyle in the area was about a century behind. It is said the Mucha started drawing before he could walk although he spent his early years as an amateur musician and choir boy. He was already a high school graduate when he realized that living people were the ones that created the art in local churches that he liked so much. From then on he decided to be a painter.

At age 19 he worked in Vienna doing theater stage scenery where he started developing his richly decorative style. He spent two years painting murals in the Hrusovany Emmahof Castle in Munich for a patron. He impressed his patron, Count Karl Khuen-Belassi, who financed his art studies at the Munich Academy of Fine Arts. Later, he was allowed to go to Paris and enroll at the Academie Julian.

He went to Paris in 1887 at the age of 27. While he was older than many of his contemporaries, he had more experience.  But after two years, the funds stopped coming and Alphonse Mucha became one of the starving artists in Paris. He spent five years living the part. He lived above a Cremerie where other art students stayed. He drew illustrations for magazines that paid low rates. Impressionism was at its height then and Decadents and Symbolists emerged. He gave impromptu art lessons and helped the establishment of Bal des Quat’z Arts, a traditional artists’ ball. In those years, he was devising his own precepts and theories about what direction he wanted his art to take.

It cannot be denied that Alphonse Mucha is one of poster art’s great pioneers. His success after his creation of the poster for Sarah Bernhardt placed Mucha as the original Art Nouveau designer. His work included new decorative art technique, a style that influenced a slew of graphic artists and painters. Aside from his poster lithographs, Mucha also created stained glass, jewelry art, textiles, packaging, stamps, calendars, illustrations and book covers. His style come to be called Le Style Mucha. His success as a poster designer allowed him to travel to America and around Europe. 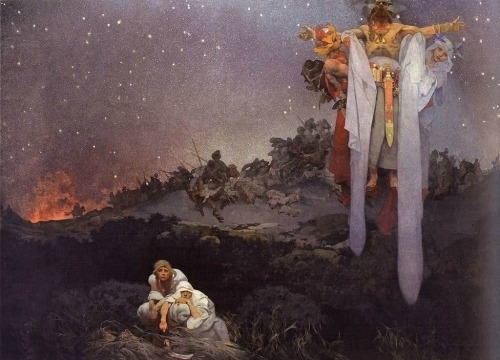 It was also by chance that he got to know about the play Gismonda when he went inside a print shop late in 1894. The shop needed a new poster to advertise the play. He signed on to create a chromolithographed poster within two weeks. On January 1 1895, posters for the play were displayed around the streets of Paris. The poster and the design itself became a sensation. For one thing, the vertical format is a takeoff from the usual. Only a few text (just the important information) were in the poster, which was also vividly colored instead of just a two-color or monochrome poster that was typical during that time. It was also rich in creative detailing. The six-year exclusive contract with Sarah Bernhardt allowed Mucha to create several costumes, scenery and stage sets for the Theatre de la Renaissance aside from a number of posters for Bernhardt, including Hamlet, Tosca, Medee, La Samaritaine, La Dame aux Camelias and Lorenzaccio.

The birth of Art Nouveau was during this time, when artists were looking for ways to erase the dividing line between audience and art. At that time Hector Guimard was designing metro stations while Edward Coley Burne-Jones was designing wall papers, and Mucha was designing stage sets and advertising posters.

When he returned to Moravia and Prague in 1902, he began to formulate the design for a series of paintings showing his patriotism and his true love for history painting. He started raising money for his epic project and while traveling with his wife in the United States, he met Charles Richard Crane, a millionaire who was a Slavophile. He agreed to finance the project, which Mucha started in 1909.

He envisioned that he can finish the work in about five years, but creating the 20 huge murals that depict the history of the Slavic and Czech people took him 18 years to complete. It was better received in the United States than in his native country, due to the distractions World War I brought. He donated the series to the city of Prague in 1928 but were kept for more than 25 years before they were shown to the public.