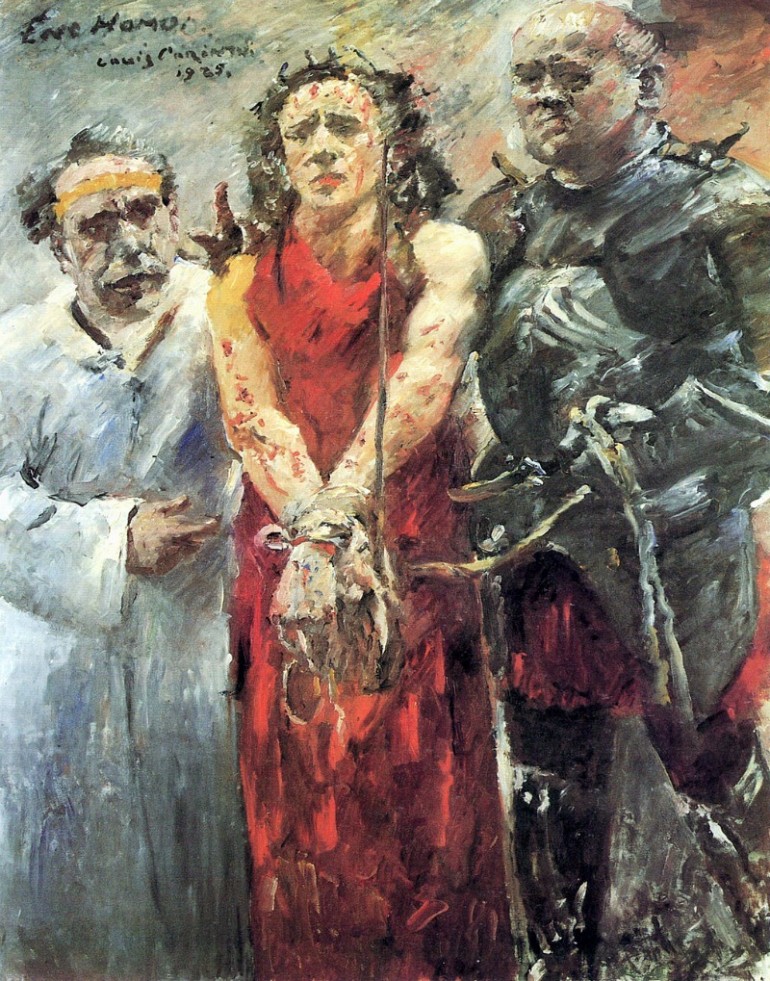 “Ecce Homo,” a painting done in 1925, is considered as one of 20th century’s greatest paintings. It depicts the painter, Lovis Corinth as Christ. It is a very moving painting, showing the artist’s distinctive violent brushwork, which is employed in his later paintings, a style that’s closer to Expressionism. It’s a painting that reveals the inner essence of the work, his borderless approach to traditional icons and images and at the same time showcasing his love for the work itself and the sensual expression of colors.

German Impressionist painter Lovis Corinth’s birth name was Franz Heinrich Louis Corinth. He was born in Tapiau, Prussia on July 21, 1858. His father was a tanner. He already displayed his drawing talent at an early age and at age 18 he attended painting classes in an art academy in Königsberg. Four years later he was at Munich’s Academy of Fine Art, which, at that time, was a rival of Paris when it comes to Europe’s avant-garde art.

When he was still a student at Königsberg, he was taught by Professor Otto Günther, who brought him along the professor’s many trips. In 1880, Corinth moved to Munich and studied under Franz von Defregger and Ludwig Löfftz at a later date. At that time, he was influenced by the Leibl-Kreis of Munich, a group of naturalist painters, who interpreted the works of Barbizon School painters and Gustave Courbet. Corinth stayed for a short time in Antwerp before moving to Paris, and became a student at Académie Julian, under William-Adolphe Bouguereau and French historical painter Robert-Fleury. He came back to Königsberg in 1888 and used Lovis Corinth as his name.

He returned to Munich in 1891 and founded an art group called Sezession although it did not last very long, with some of the members breaking away from the main group and established the Freie Vereinigung. With the lack of work, Corinth went to Berlin after a decade and started a women’s painting school, where he met and eventually married one of his students, Charlotte Berend. He later became an official member of the Sezession in Berlin, and later became its president.

In his career, Lovis Corinth had many influences. He was a great advocate of Impressionism. He was not only a painter but a printmaker as well. Early in his career, he was influenced strongly by the paintings of Old Masters like Rembrandt and Rubens, and modern painters such realists Edouard Manet and Gustave Courbet. While a proponent of Impressionism and considered as one of the leading Impressionists in Germany along with Max Slevogt and Max Liebermann, his work was not heavily influenced by the works of the French Impressionists, but continued to be strongly connected to Realism, with Rembrandt as his main source of inspiration. 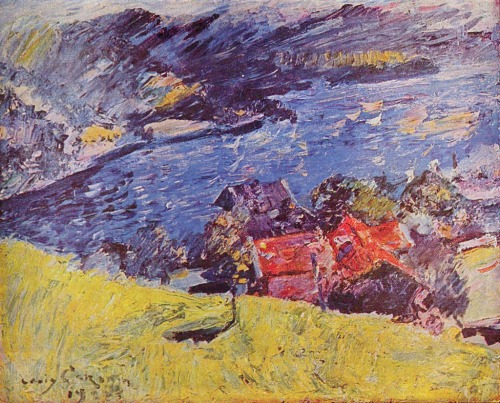 He created several landscapes although many of these were not commissioned work. They were more due to his desire for creative expression. In his landscapes, he showed the traditional painting elements: pictorial qualities of the work itself, intense colors, vigorous brushstrokes, surface texture and composition.

When he had a stroke in 1911, which paralyzed his left side temporarily, he returned to Expressionism. His brushwork became more emotive and looser, with his mature works showing a combination of the two styles. He did not specialize in any genre but opted to explore them. He was prolific and created several still lifes, religious and allegorical art, portraits and landscapes. As a printmaker, he created etchings and woodcuts, as well as lithographs and drypoints.

Many of Corinth’s famous works are shown in various art galleries. Some of them include the Ecce Homo, Self-Portrait with Straw Hat, Magdalen with Pearls in her Hair, Samson Blinded, Embracing, The Artist and His Family, Self-Portrait with Skeleton and Nude Girl. The series of landscape painting depicting the Walchensee are at the Tate in London.

He was on a trip in 1925 to view the paintings of Frans Hals and Rembrandt in Amsterdam when he succumbed to pneumonia. He left behind some 1,000 works on graphic art and several essays and books on painting.

From being an average painter, he became one among the greatest artists, according to German Expressionist painter Ernst Kirchner of Die Brucke, an influential group in the development of Expressionism in Germany.