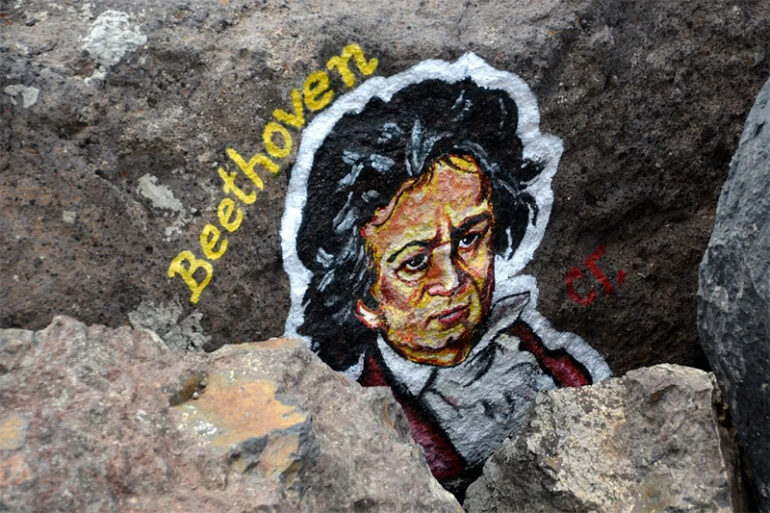 Ludwig Van Beethoven has always been described as disagreeable, difficult, and often miserable. He was infamous for being untidy and suffered from a host of diseases like liver disease, diarrhea, and constant bouts of depression. He was also messy, lived in poverty, had difficulty sustaining any form of relationship, and was quite paranoid. Kinder descriptions have depicted the composer as ill-groomed and defiant, but still a loyal friend to those who favored most.

Yet despite all of his negative traits, Beethoven may very well be one of the greatest composers that ever lived, creating music that has survived beautifully through the ages. This is evident with concerts performed by some of the best musicians of our time featuring his masterpieces and films that often use his music to evoke emotions from viewers.

Born in 1770 in Bonn, Germany, Ludwig Van Beethoven was the son of a court musician. A talented pianist, he made his first performance at the young age of eight. His father wanted him to be the next Mozart, eager to promote him as a child prodigy, which may have led to his loathing for child prodigies. This distaste may also have stemmed from his dislike of his father, who made life hard for the young musician. Beethoven’s father was an alcoholic who, often drunk, would pull his son out of bed and insist on him playing the piano. Following the death of his mother, his father would often lay in a drunken stupor in gutters, close to being arrested by the police, if not for the pleas of his children. Eventually, Beethoven assumed the responsibility of caring and earning for the family. And while he may have hated his father’s domineering ways, he had also assumed it unknowingly.

Music in the midst of deafness

Beethoven began to lose his hearing during his mid-20s. One of the theories of what caused his deafness was his love of drinking, a trait which he most likely inherited from his father. He would drink mostly cheap wine, which during that time would sometimes contain lead as a sweetener. Lead is known to be toxic, harm the gut, and cause hearing problems. Being deaf further isolated Beethoven, who had already been suffering from depression. To cope with all of the challenges he faced, he turned to music and created some of his best compositions. These included three symphonies and other priceless musical pieces. He was known best for piano improvisations, dependent on the music he heard in his head, playing what he was no longer capable of hearing. What is probably the most astounding fact about Beethoven is that he composed his most beautiful music during the difficult period of his life when he was deaf, a feat that has been thus far unparalleled by other great composers and musicians.

There is no doubt that Ludwig Van Beethoven has left an indelible mark in the history of music. Long after his death, his legacy of music remains forever imprinted in the hearts of all generations. He has been an inspiration and continues to elicit the same emotions from his masterpieces as he did during his lifetime. He is, and will always be, one of the greatest composers that ever lived.

1st and featured image from https://pixabay.com/photos/beethoven-art-stone-grafiti-2078234/