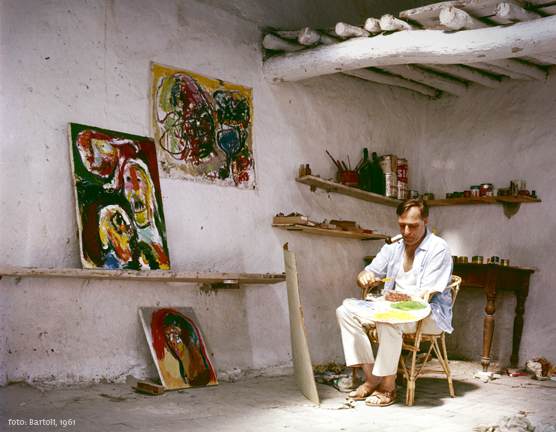 One of the 20th century’s most popular painters, Asger Jorn, hailed from Denmark. He is a painter, ceramicist, sculptor, and printmaker who, along with several other artists and writers, like Christian Dotremont, Karel Appel, and Carl-Henning Pedersen founded the COBRA art group, an avant-garde art group that was very active after the war.

His full name is Asger Oluf Jorn, born in 1914 Verjrum, Denmark, to a Christian fundamentalist family. His parents were both teachers and because of these Jorn received a very strict upbringing. His father eventually died while he was young, which forced his mother, Maren Jorgensen, to move to Silkeborg. There, he continued to study in a teacher training college. He also joined the boy scouts and when he finally graduated, he gathered enough money to buy a motorbike and rode it all the way to Paris.

At the time he was already a learned painter, he started studying drawing and painting before his father died. In Silkeborg he was mentored by Martin Kaalund Jørgensen and had his works first exhibited in the Frie Jyske Malere exhibition in 1933. He planned to apply to Fernand Leger’s school of painting when he got to Paris in 1936, after abandoning the idea of studying with Wassily Kandinsky. At that time Kandinsky was struggling to sell his own works and, seeing that it wasn’t in his best interest, he decided to join Fernand Leger’s academy instead. Jorn learned to love abstract art while studying at Leger’s and prefererred it more than figurative work. There he met Pierre Wemaëre, a French artist, and together they studied and mastered picture planes composition.

The following year, Jorn was at the World Exhibition, working for Le Corbusier, assisting the architect on a project for the Palais des Temps Noveaux. He returned to Paris afterwards but spent the winter season at the Copenhagen Royal Academy of Fine Arts. Jorn went to Norway with Pierre Wemaëre before entering the Royal Danish Academy of Fine Arts in 1938. In the year after, he went and married Kirsten Lyngborg.

During the war, he published the journal Helhesten to provoke the Germans occupying Denmark. This journal was a comprehensive work that featured articles about different cultures. Nazis hated this: cultural segregation has always been one of their agenda. He also went and worked with architects and decorated many buildings. In 1945, he crossed into Norway illegally for the Munch exhibition at the National Gallery. He was there to see it and it left an impression on him. The next year, he went to see Picasso in France.

The Founding of COBRA 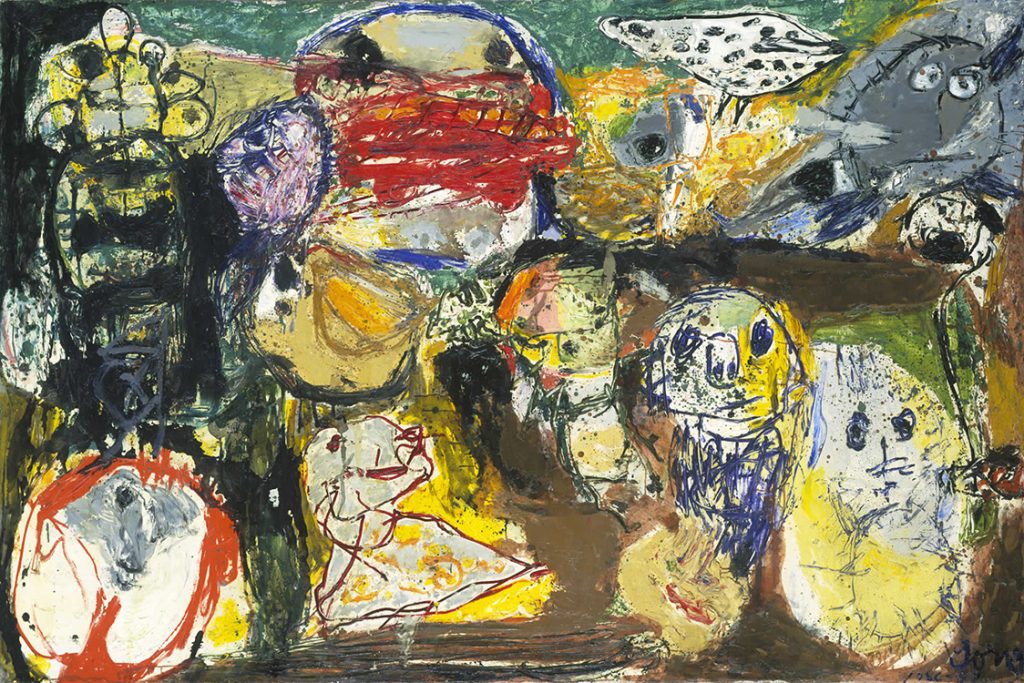 After the war, he founded COBRA together with other artists. COBRA is an abbreviation of the name of three places the founding members called home: CO from Copenhagen, BR from Brussels and A from Amsterdam. Though it was short-lived, it had a lot of great artists as members: apart from Christian Dotremont, Karel Appel, and Carl-Henning Pedersen that was mentioned above, there were also artists from the Helhesten artist group. Like Jorn himself, all the members are Marxists. The group changed their name to Internationale des Artistes Expérimentaux in 1949 but was eventually dissolved in 1951. It disbanded, but it built a network between all the member artists from Europe to America that lead to many artists using their connection with COBRA to collaborate with others.

COBRA, much like their predecessor Dada, was a rebellious modern art movement. They are best known for child-like imagery and expressive brushstrokes. They turned away conventional values and tradition while promoting the idea of free expression.

He contracted Tuberculosis in the same year COBRA disbanded. After he got better he became part of the Marxist International Situationist movement, where during that time he would find old paintings in junk shops and paint over it with demon imagery and hellscapes. From here on he’d work as a painter, illustrator and sculptor until his death in 1973.

Featured and 1st image: Asger Jorn working in Albissola in 1961 via museumjorn.

2nd image: Letters to my Son by Asger Jorn via abstractartist