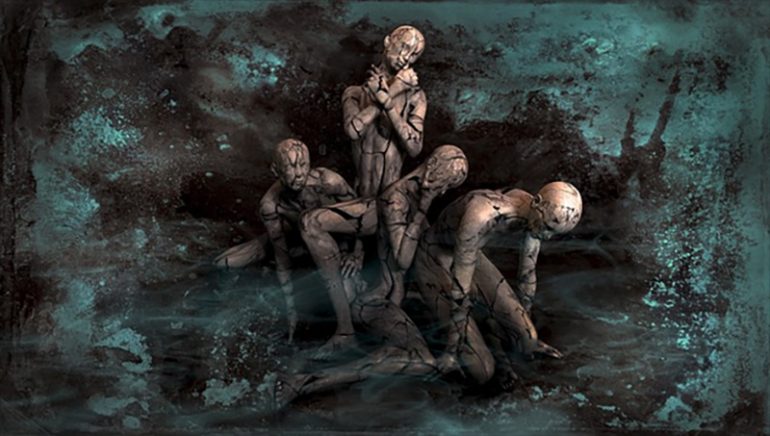 Art has always been an interesting field even for those who are not involved in the field. Artists like to experiment with different mediums, creating a variety of art. It is always amazing to see what they can come up with, sometimes you even forget they are actually random objects!

You can also find these 25 Artworks out of unusual mediums and let them serve as your inspiration for your next work.

Some of you may wonder why these artists resort to using such mediums rather than the traditional canvas and a brush. Some choose to do so because it might be more impactful with such materials, but others use them as a way to exercise their creativity. Making use of their trash, they can produce works that won’t have to end up in the ocean.

One of the interesting works that make use of trash to produce impactful art is one by Tim Noble and Sue Webster. Their work may look like a pile of garbage but once the light hits the right angle, their shadow produces figures of people. The shadows can tell us what narration they are showing, and it’s pretty funny when the exhibition is entitled “Trash People.”

Do you think they are telling us how much trash we can be?

Angels Out of Weapons

Another amazing work is by Lin Evola-Smidt who transformed guns into images of angels. It might sound like a random act for the sake of art, but this happened during the time when gun violence happened in Los Angeles back in the nineties. Later on, the area was filled with small metal angels, thus the Peace Angel Project was created.

Even if these works are amazing for making use of rubbish to something presentable, they can still be easily mistaken as actual rubbish.

A contemporary artwork by the duo Goldschmied and Chiari had been mistaken for leftovers of what was thought to be a party held the night before. It was meant to showcase the “1980s hedonism,” displaying cigarette butts, several empty champagne bottles, and confetti all over the floor.

This apparently was not the first time it happened as there were many others that were not only cleaned up but also dismantled and thrown away.

The Ugly and the Twisted Are the New Modern Art

As you have noticed, it seems that the most popular works are usually viewed as “ugly” or “twisted.” The standards for beauty now vague, and it is usually the most shocking one that wins in modern art. But in this video, it brought out the questions we’ve probably been having ever since looking at confusing modern artwork. Are they really legit?

At the end of the video, Robert Florczak proposes that in order not to fall victim to “bad art” we should patronize even our local museums and art galleries. They are, after all, a business. He also encourages the educating of classical art appreciation in schools.

What do you think? What are your favorite artworks that raise the eyebrows of others?

Featured and 1st Image by Stefan Keller from Pixabay