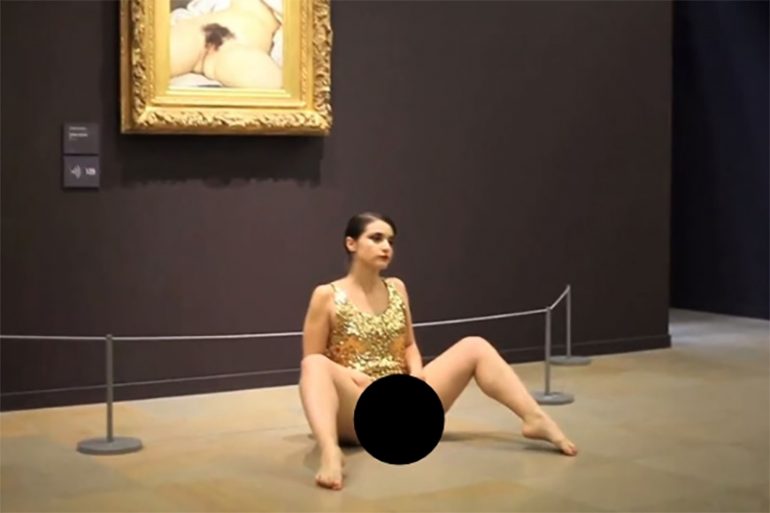 While looking through a bunch of paintings, one can find a variety of genres, ranging from realism to abstract. With the new technology, art is no longer limited to paint and paper and has begun exploring through the world of design and animation. Sculpting has also evolved into a whole new level, things from garbage are now potential materials for sculptures other than marble or stone.

Art can be made out of anything and can be turned to anything. Because of this “anything”-ness, art can be a very confusing concept to grasp. This article categorizes art into three main topics to help you understand what it can be. But some of us still wonder how were some pieces that don’t appear “art” considered as one?

Here are some of the questionable “artworks” that “shook” the art industry.

Origin of The World

Many realism paintings, although are praised for capturing the details of their subjects, have many times raised questions on their morality. There are many types of inappropriate artworks, whether it be political or ethical, but we shall focus on the kind that is like a Gustave Courbet work, ”L’Origine du monde” (In English: “Origin of the World”).

A 1866 French painting that shows a close-up of the genitals and the abdomen of a female laying on a bed, with her legs spread open.

As one of the most scandalous art events of 2014, a performance artist reenacts the painting by seating herself in front of the artwork and exposing her genitals. The artist was escorted by the museum guards amidst the cheering audience.

A well-known Party Game company, Cards Against Humanity, well viral last 2014 for being able to sell boxes of literal feces of a bull. This might not be a piece of artwork, but does this not remind you of anything?

An old but still relevant work by Piero Manzoni produced to poke fun on the idea of “art objects.” Guess what it was? 30 grams of cans of his very own excrement. He had once said that if collectors wanted something personal and intimate to artists, what isn’t any better than artists’ own bodily fluids?

Paintings That “Can Easily Be Done by a 5-Year-Old”

You probably have heard a lot of people describe several artworks as “I bet my child can even do that.” They can’t be blamed for thinking that way because there really are some pieces that appear so simple that it raises a question why they’re being displayed.

The White Paintings by Robert Rauschenberg in 1951 is a series of different panels that have been painted in completely white. The aim was to show pureness that has been untouched by human hands. It appears so easily done but it does raise some awareness on the meaning of this painting.

So What Really Makes Art Art?

Even some artists wouldn’t know how to answer that. Perhaps, it is art when it not only presents itself for visual pleasure but also triggers the confusion, the uncomfortable feelings, and the dialogue. Art earns its value by becoming worth talking about rather than becoming a white elephant.

What about you, what do you think makes art art?