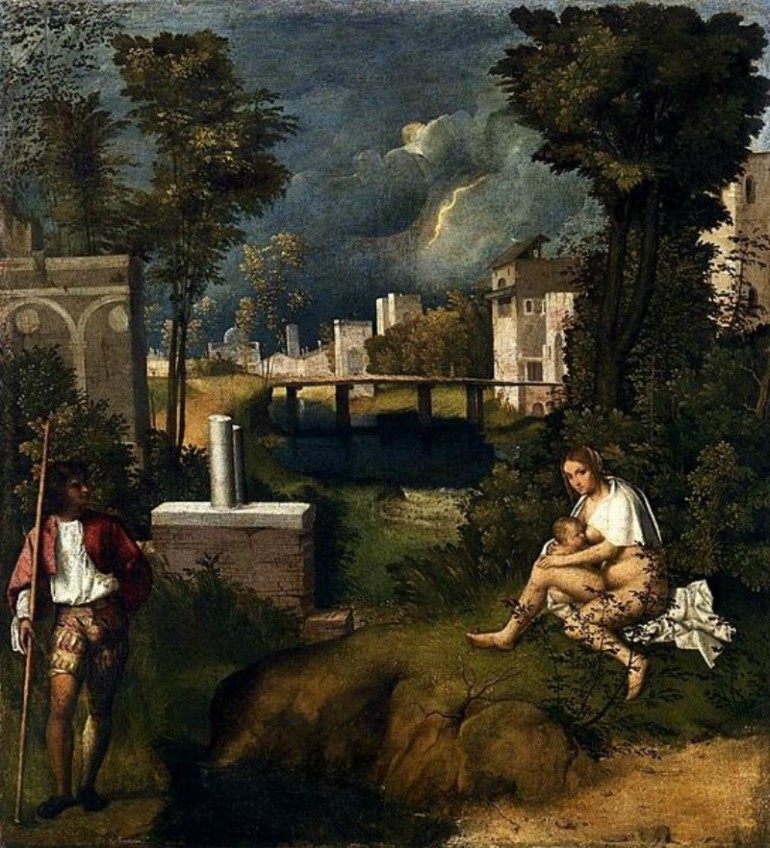 Despite his very short life, Giorgione (Giorgio Barbarelli da Castelfranco), was an important painter during the High Renaissance in Italy. It is a pity that illness cut his life at age 33. Giorgione was closely associated with the younger Titian. Together they founded the Venetian School of Italian Renaissance. This style was distinctive for creating varying effects through mood and color, which was a far cry from the paintings in Florence that relied more on linear design.

Giorgone’s legacy was later developed and perpetuated by Titian and other artists from the 17th century. Without a doubt Giorgione was the first Italian painter to create landscapes, such as “The Tempest” with figures without any historical, allegorical or devotional purpose. Likewise, his works exhibited the warm, glowing and blended intensity of colors that became identified with the Venetian school of painting.

Giorgione was born circa 1477 in Venice. His work was defined by its baffling poetic quality. It was also very difficult to ascertain his works, because he had a very short life and there are only five or six paintings directly attributed to him that survive to this day. This uncertainty about the meaning and identity of his art made Giorgione a very mysterious painter.

At age 23, based on the accounts of Vasari, he was already a recognized painter and was commissioned to do the portrait of condottiere Consalvo Ferrante as well as the Doge Agostino Barbarigo. In 1504 he received the commission to do an altarpiece as a memorial to Matteo Constanzo, another condottiere (mercenary) to be placed at the Castelfranco cathedral. Three years later he got the order to do a painting for the Doge Palace’s Hall of the Audience. From 1507 to 1508 Giorgione and some of his contemporary artists were employed to paint frescoes to decorate the exterior of the German Merchants’ Hall or the Fondaco dei Tedeschi.

According to Vasari, meeting Leonardo da Vinci in the year 1500 when the famous master from Tuscany visited Venice, was a very important occurrence in the life of Giorgione. His work, his temperament and the imaginative and sensuous grace of his art was likened to da Vinci, who, 20 years earlier have released art from being shackled by antiquated rigidity. Giorgione painted with freedom and skillful mastery of the medium during his time.

Based on Giorgione’s biography as written by Vasari, Giorgione was the master of Titian. Both of them were once Bellini’s pupils according to Ridolfi. The two friends worked on the frescoes at Fondaco dei Tedeschi. It was also said that Titian finished some of the paintings Giorgione left due to his untimely death, although it is difficult to ascertain the identity of those paintings.

While his art career was short, Giorgione painted a varied range of subjects, from altarpieces to portraits. His paintings usually contained no story or just implied a story through color and form. But he was definitely innovative in his work and had a major influence on his successors at the Venetian school, such as Giulio Campagnola and his brother, il Cariani, Palma il Vecchio, Sebastiano del Piombo and of course, Titian. He even influenced his own teacher, Giovanni Bellini, who was already considered a master. In Venice, his style heavily influenced artists such as Domenico Mancini, Domenico Capriolo and Morto da Feltre.

The altarpiece that he did for the Castelfranco cathedral, where the figure formed an equilateral triangle and the landscape in the background given an importance was a great innovation in the art in Venice, which was followed by Giovanni Bellini and other artists.

During the time that Leonardo da Vinci was using chiaroscuro, Giorgione was also using the more refined chiaroscuro, sfumato – where the use of shades of color for perspective and light was more delicate.

The “Sleeping Venus” was one of the extant works of Giorgione. It is now on display at the Gemäldegalerie Alte Meister in Dresden, Germany. The use of landscape to frame the nude figure was innovative. The contour of the background followed her profile. Using a nude woman is believed by some authorities in art as the beginning of modern art. The pure and severe line and contour of the image subdued the sensuous nature of the painting. This was done in 1510 and the last of his works. His death left the painting unfinished and Titian painted the sky and landscape to complete the work. Titian painted the “Venus of Urbino” in 1538, which was very similar to the Sleeping Venus although the setting was indoor. Several paintings of this nature was created by other artists, but nothing was able to beat the quality of Giorgione’s work.