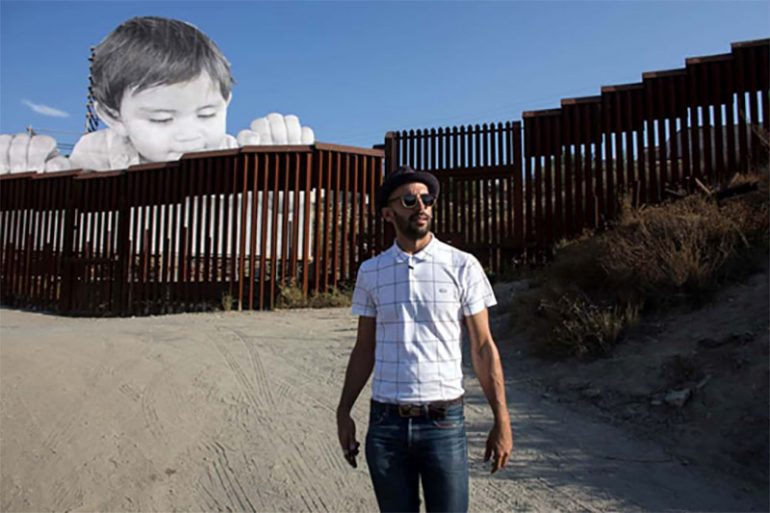 When JR unveiled his newest work over the US-Mexican border, he didn’t intended it to coincide with the week US President Donald Trump would abolish former US President Barack Obama’s Deferred Action for Childhood Arrivals program, also known as DACA.

The Baby in The Border

He told the press:  “Like for us we know all the implications, what it represents, how it divides, but for a kid, I didn’t have the answer.”

Then after a year, he started scouting the US border for a spot to erect his new piece. As he went by Tecate, he noticed a house. He went over with a Mexican friend of his to see if there’s a possibility of the piece being erected somewhere there. They met with the woman and her 1 year old child inside. It was this child that will remind him later of the child he dreamed about, and serve as the model for the art piece. 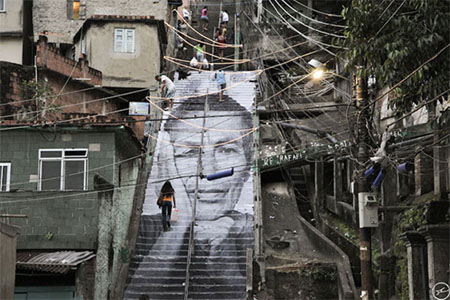 JR is a French artist and a photographer. No one knows what his real name is. He began his career as an artist when he was 15 years old doing graffiti works. At the time he was only interested in making a name for himself and would usually choose places like trains and rooftops as a canvas. At TED2011, he said that going to these places was like an adventure for him and his art is like a way for him to leave a mark that he was there in those places. When he found a cheap camera, he started taking pictures of their adventures.

At seventeen he started photocopying his works and pasted them. It was his “expo do rue”, which means “sidewalk gallery”. He didn’t need art galleries to decide if his works are worth showing to people, he’d just directly show it to the public.

“The city is the best gallery I can imagine,” he said.

From there he went on to use this artstyle, taking photos of people and pasting them creating huge posters, on walls, rooftoops and buildings. In 2007, he went to Israel and Palestine after hearing about the conflict between the two. Taking pictures of Palestinians and Israelis making faces and paste huge copies of it on the Separation Barrier, the illegal project came to be known as Face2Face.

He did a lot of pieces around the world. Especially in poor countries, like in Kenya where he used vinyl to cover the roofs of people’s houses with posters of people’s eyes. Another example is in India where he made use of white sheets with sticky parts. Dust from the streets would stick on the paper, revealing the image after a few days.

In 2010 he won the TED Prize for 2011 and started the Inside Out Project, getting support and participants from all over the world. Some 150,000 people joined in on the project. The participants would send pictures and these will be made into posters and sent back to the participants for them to display it in their communities.

JR thinks that it is amazing he completed the piece at the same time as the abolition of DACA and hopes it could create more dialogue. He added that the idea behind the piece “is to raise more questions.”

Featured and 1st image by JR with his newest work behind him, <a href=”https://www.theguardian.com/world/2017/sep/09/giant-portrait-of-toddler-peers-over-us-mexico-border-wall”>via The Guardian</a>