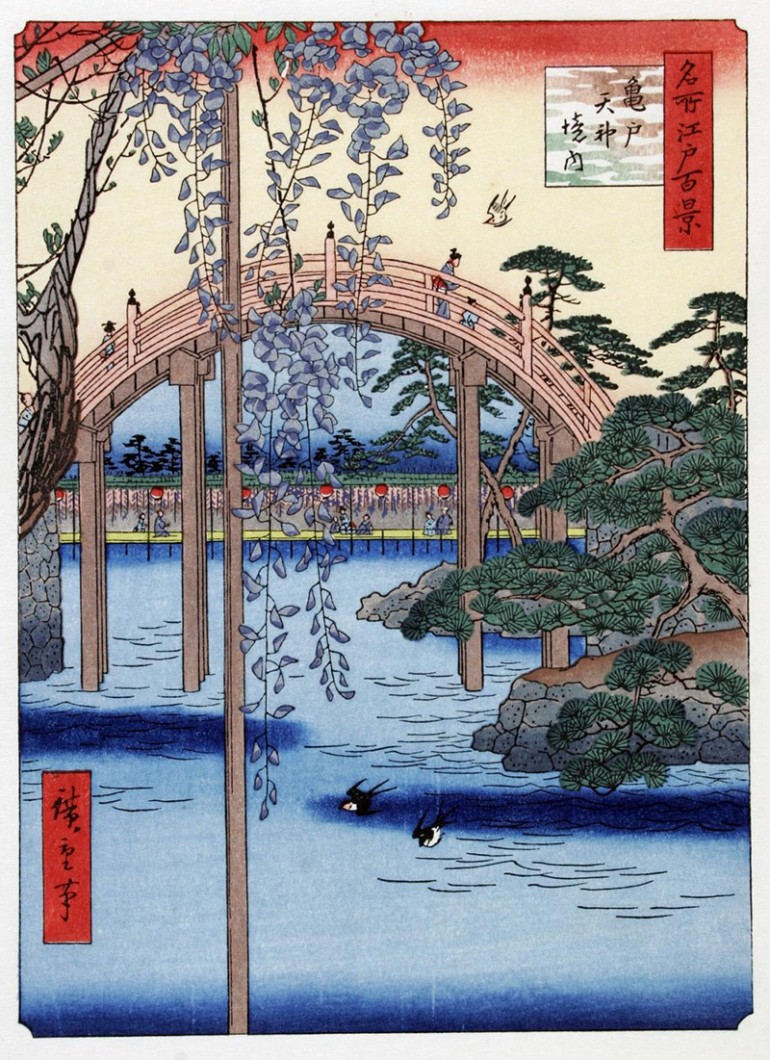 Andō Hiroshige was known by many names. His birth name was Andō Tokutarō and he was born in 1797 in Edo (Tokyo).  His professional names were Ichiyūsai Hiroshige and Utagawa Hiroshige. Nevertheless, he was called Andō Hiroshige by many. This Japanese artist was one of Japan’s last ukiyo-e masters. He was a specialist in color woodblock prints and was highly skilled in landscape compositions. It was a pity that he was under-appreciated in his home country while the West was calling him an artistic genius. It was only when he became sought after by Impressionists and Post-Impressionist artists and collectors in the West that he gained recognition in Japan. The print series called the “Fifty-three Stations of the Tōkaidō” that he created from 1833 to 1834 is considered the finest work of Andō Hiroshige

Hiroshige was the son of an Edo fire brigade warden. Even at an early age he was already doing sketches and it was assumed that he received some training from another fireman who studied under a traditional Kanō school of painting master. He inherited the post his father held as a fire warden when the latter died.

He entered the school of Utagawa Toyohiro, an ukiyo-e master around 1811, who harnessed his full potential through his refined and modest taste, which helped Hiroshige to develop his own style that eventually led to him being able to express it through his beautiful landscapes.

An artist at a young age

Hiroshige received a school license and a nom d’artiste at age 15, but it was only in 1818 that he had his first work published via a book illustration, wherein his signature appeared as Ichiyūsai Hiroshige.

When his own son was old enough, he relinquished his post as fire warden to his son so he can devote his time to his art. Biographical materials about Hiroshige and artists like him during that period were scarce because they were only considered as artisans, despite the fact that their works were highly appreciated and at times, collected. Art historians used his works to trace his adult years.

Based on collected materials, historians surmised that the artistic life of Hiroshige could be defined in different stages. From 1811 to 1830, he was a student who followed the work of his mentors, thus he created figure prints of samurais (warriors), actors and beautiful girls. The years 1830 up to around 1844 were considered the second phase of his artistic life, the time when he started creating landscapes. His early works during this period showed his romantic ideal of what constituted beautiful landscapes and he also created flower-and-bird prints. It was during this period that he created his masterpiece, the “Fifty-three Stations of the Tōkaidō,” as well as several print series showing Japanese landscapes. The last stage of his career was from 1844 to 1858, where he mainly created landscapes and landscapes with figures. 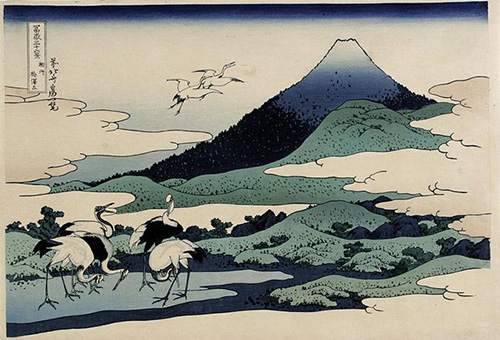 55 prints. The other two showed the beginning of the highway he traveled and the scene during his arrival in Tokyo. The other 53 prints were of the stations he stayed in when he made the trip from Edo to Kyōto in 1832. This series became so successful and made him quite popular. He chronicled many of his trips around Japan later. Some of them included the “Famous Places in Kyōto,” “Eight Views of Lake Biwa,” “Sixty-nine Stations of the Kisokaidō” and “One Hundred Views of Edo” that he created between 1834 and 1858.

It was estimated that Hiroshige created about 5,000 to 8,000 prints during his career and that from some of the woodblocks he created, about 10,000 were made.

Compared to his contemporary, Hokusai, Hiroshige’s masterpieces showed a human touch that no other ukiyo-e artist was able to achieve. He had the skill to capture the very essence of the scene he witnessed, thus he was able to portray beauty that was intimate and tangible.

Hiroshige commanded landscape printmaking and his travel prints showed travelers in various situations as they went from stop to stop along well-known routes. He showed them traveling in snow, in the rain and in all the seasons. Together with Uoya Eikichi, a publisher, Hiroshige created a series of prints using the finest printing techniques available at that time, employing exquisite color gradation with iridescent effect through the addition of mica. The luxury edition of his prints were used for embossing, blind printing, fabric printing and glue printing. He was an ukiyo-e master who was also known for his striking colors, the seasonal allusions and his very unexpected vantage points.

The death of Andō Hiroshige marked the decline of the art of ukiyo-e. But his work exerted influence on Western painting toward the latter part of the 19th century, as Western artists became interested in Japonism, with several artists including Vincent van Gogh creating copies of prints the Japanese artist did. Other artists influenced by Hiroshige were Monet, Andō Hiroshige and Cézanne. His style also had an influence in Russia’s Mir iskusstva art movement