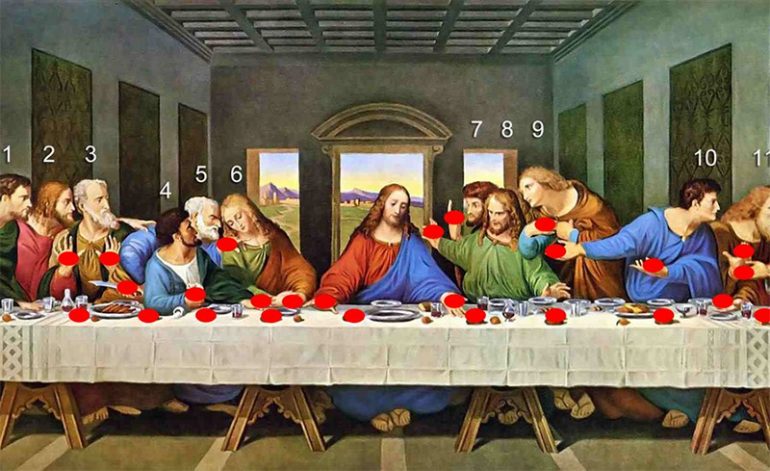 If you can’t get enough of conspiracy theories from Da Vinci Code, this article is for you.

How the Last Supper Foretell the End of the Word

Sabrina Sforza Galitzia was a Vatican researcher that claims the half-moon window on top of Jesus in the painting of The Last Supper foretells the end of the world.

There’s no clear explanation on how Galitzia found out this theory. However, she suggests that the window has astrological and mathematical codes that predict the “final reckoning” that will happen in 4006. There will be a great flood that will begin on March 21 and the world will end on November 1, 4406. Though these claims and predictions sound a little crazy, Galitzia devoted her life in studying da Vinci’s manuscripts at UCLA before she studied the Vatican archives so this girl knows what she’s doing.

How The Arcadian Shepherds Point the Location of Jesus’s Tomb

The Arcadian Shepherds was painted by Nicolas Poussin. The painting exhibits a woman and three shepherds who are standing around a tomb with the Latin inscription that says “Even in Arcadia I exist.” Arcadia was romanticized as a mythical paradise in Greece.

Many believed that the tomb in the painting holds the bones of Jesus Christ because of its inscription. The authors of the book The Tomb of God also support this claim. What’s more fascinating is they were able to trace the location of the tomb to a French town known as Les Pontils.

Mona Lisa and Her Mysterious Eyes

The painting of Mona Lisa is popularly known because of her eyes, which seem to be looking at you no matter where you are.

Another discovery was made in 2010, when members of the National Committee for Cultural Heritage in Italy found something in Mona Lisa’s eyes. When they examined it using a magnifying glass, a subtle “LV” initials were hidden in her right eye. The left eye has letters and number that were still undefined until today.

Nobody knows why da Vinci painted such intricate detail in his artwork. But the members of the Committee pointed out that he chose to put it in the darkest part of Mona Lisa’s eye to hide it from the viewers.

The popular fresco found on the ceiling of the Sistine Chapel was the work of Michelangelo. But the artwork was more than just its carefully painted Biblical scenes.

In 2010, two experts in neuro-anatomy published a paper that claims how Michelangelo painted the human brain in several sections of his work. When you look at the “The Separation of Light from Darkness”, the authors claim that it is the perfect illustration of the brain stem and the spinal cord. On the other hand, “God Creating Adam” depicts the cross section of the human brain.

There are claims that Michelangelo attached these brain sketches in his religious fresco because he wanted to attack the Church for its hate towards science.

These conspiracy theories are insane but if you are a fan of things like this, you probably wouldn’t mind. These theories are mostly just speculations however; it’s still interesting to know that popular artists have hidden subtle details in their work for us to find out.